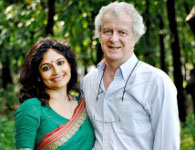 Contic was founded in 1997 by Yves Marre and Runa Khan. The concept behind Contic came to Yves when he first sailed into the Sundarbans from France 18years ago, on a river barge that was to become the Lifebuoy Friendship Floating Hospital. Here he discovered the impressive traditional fleet of Bangladesh that gave him the feeling of having travelled in time as well as space. Later, after he and Runa married and decided to settle in Bangladesh, Yves gave up Air France, where he had been a crew member for 23 years, and thought back to the strong emotion he had felt when he first saw the boats of Bangladesh. The two decided to try riverine tourism, and Contic, which stands for ‘confluence of technologies, ideas and cultures’ was born.

Contic unites the ancient technology of the carpenters of Bengal with ideas from the rest of the world, uniting absolute respect for local naval tradition, real comfort with the needed modern equipment (good diesel engines, electric generator, fans, etc). The real success of Contic lies in the mating of these many elements with due respect for each of them. Early on, when it became clear that these traditional boats were disappearing, Yves and Runa conceptualised building models of the traditional boats of Benga. Thanks its long and deep experience, Contic is the best in knowledge about traditional boats.

From the very beginning , Contic has employed local carpenters, used local materials and built traditional boats, working with respect for the environment by trying to protect the forest and not leave any tracks behind. We had gone down the field of ecotourism even before the idea of ecotourism came to exist and become a buzzword.

Today, Contic is under the management of Wasama Doja. Yves continues to see to Taratari Shipyard (www.taratari.org), while Runa is executive director of the Friendship organisation (www.friendship.ngo).